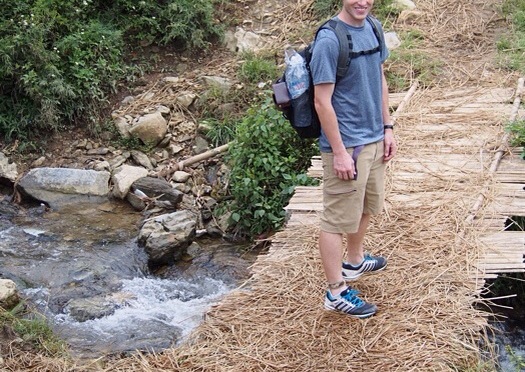 After our extra long train ride (see previous post for ranting about transportation issues) we arrived in Bac Ha late Saturday evening.  This village is home to the largest ethnic minority market in the area, which we had come to see.  We got up early and went the few blocks across town to the market area.  People from all over come to this town on Sundays and tourists from Sa Pa come later in the morning.  The women show up in their bright traditional costume, some even walking or biking a few hours to sell their wares.  It was an amazing splash of color on a pretty cloudy morning.  The Flower H’mong women have the most incredible handmade skirts and shawls.  They also have wraps for their calves, like tall socks, but without the foot part.  We really enjoyed walking around the market, except for the animal section, which we skipped.  I wasn’t up for seeing adorable puppies in cages and squealing pigs in bags.  Every dog we passed, all I could think of was how he could be someone’s dinner.  But I overheard a guide tell a group of distraught teenagers, “Don’t worry.  They don’t eat the small ones.”  Since we are space limited, we didn’t do much shopping, but I did get a hand embroidered tote bag in the same fabric as the women’s outfits.

We checked out of the hotel and were lucky to catch a bus a minute later headed back down to Lao Cai.  It was an interesting ride, per usual, but we came out of it unscathed (except for maybe contracting a head cold from my seat mate).  After transferring in Lao Cai, we headed up into the mountains to Sa Pa.  There were lots of tour companies advertising Sa Pa guided treks.  We didn’t really feel like going with a group.  And Riki takes lots of photos so we kind of need to go at our own pace.  We did some research, bought a $1 map at the tourist center and hit the trail.  First stop was Cat Cat village, an easy 30 minutes down into the valley with a nice waterfall.  Having yet to find a good map while in Asia, our trail map was less than helpful.  We asked around though and were pointed down an unmarked path.  We were a bit apprehensive, but soon caught up to a small group headed the same way. Normally, guided groups are followed by local women who are chatty and full of information about their lives and villages.  We had heard these women will walk you to their village and then try to hustle you to buy their handicrafts.  Wanting to avoid this, we opted to trek without a guide and left the women at the beginning of the trail with a stiff “no shopping.”  The trail was pretty muddy and had some steep drop offs at points, but it was obviously well travelled.  It took about 2 hours to get to the next village, which was mostly flat rice paddies except for a lush forested area up a mountainside.  We thought we were going pretty slow, but apparently were making good time compared to the itineraries we had seen for guided treks.

Once we crossed to the other side of the valley, we encountered the steeper rice terraces.  The views were incredible even though most of the rice had already been harvested (check out the pictures in the other post).  There were lots of pigs, chickens, water buffaloes and ducks.  Lots of little huts.  All was going well until we took a lunch break in one of the terraces. Our theory up until that point was to follow the river and continue downstream when the trail spilt.  Well the trail split and one way went downstream and one way went uphill.  We went downstream, but ended up on a water buffalo trail in the middle of a rice terrace.  Then we were on a goat trail, crossing a creek and scrambling up 5′ muddy terraces.  The goats and water buffalo obviously had better footing than we did.  We finally could see the trail we should have been on, but there was no way to get there without getting incredibly wet.  We backtracked, hopped through a cabbage patch and found another goat trail that led back to the main trail.  40 minutes later, we were back on track.

We continued down river to Giang Tu Chai, where many guided tours go for lunch and souvenir shopping.  After 5 hours trekking, we were a bit burnt and pretty tired.  Did I mention we also had to be back to catch a shuttle back to the train?  Good thing we weren’t lost much longer.  We hopped on the back of a motorbike and for a couple bucks made it back up the mountain in time for our shuttle.

Then we had a sleepless night train back to Hanoi.