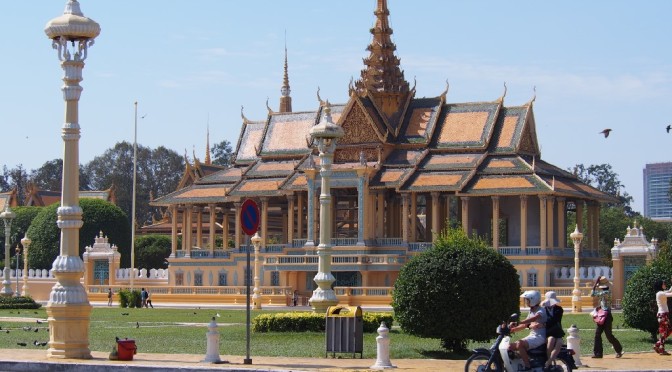 1. Check out our new poll on the sidebar – where should we go next? (full site view only)

2. If you don’t know much about Cambodia’s recent history, read up.  It’s been a rough half-century for these people.

Leaving Phu Quoc, Vietnam for Phnom Penh was probably our most confusing day of travel yet.  We knew it was going to be rough going in and we had downloaded Insurgent to listen to on the way, so we thought we were prepared.  But alas, we weren’t.  We boarded a jam packed minibus to get to the ferry, which turned out to be an older one (not the nice Superdong we took over).  Our bags were put on the open top deck, too close to the spray from the fast boat in my opinion.  An hour and half later we were picked up at the ferry station in Ha Tien by a very nice minibus, large and clean.  Thought that was a good sign.  Wasn’t.  We were shuttled to a travel agency with a bunch of other Westerners, where we were told to give over our passports, $35 and our yellow international health books to get our visas.  I’m pretty sure the visa fee is only $30, but the lady would not budge and then insisted we would have to pay an extra $1 if we didn’t give the yellow health books.  I’d like to point out that the only thing in my yellow book is a yellow fever shot I got 7 years ago.  Its not going to tell the Cambodians much, if anything.  So we did all this and were told to wait an hour.  Meanwhile, we ate lunch and waited 2 hours before being put into a different, not as nice minibus with 8 other people to go to the border, without our passports.  At the border, we were kicked out of the minibus without our bags and told to walk.  To where, we didn’t know.  We went through one building, right around the metal detectors and out again.  No one stopped us until we reached an open hut, where they actually had our passports and proceeded to distribute them to our growing group of confused tourists.  Then we were beckoned back to our minibus, which had gone through a different route.  We were told to grab our bags and switch to a different minibus, that some other tourists had come across on.  We settled in, only 10 of us, half going to Phnom Penh.  Its comforting when you have other people in the same boat.  But that sentiment didn’t last, as we went about 3 minutes down the road, past the brand new casino, and turned around.  The driver got out and beckoned for Riki and I to exit the bus (not the other 4 people going to the same place).  We were loaded onto another minibus, empty, except for the 30 or so flies swarming around.  Then we just sat there.  With the flies in the heat, no English explanation.  Eventually, a bunch of Cambodians boarded the bus and off we went.  From there we did the normal thing, load as much stuff and people as you can possibly cram into the bus and go hurtling down the road, at top speed, only to stop abruptly when someone waves you down.  We eventually arrived in Phnom Penh, got dropped off in the middle of nowhere, except conveniently next to the bus driver’s friend, a tuk tuk driver.  We paid an exorbitant price to a different tuk tuk who didn’t know where he was going and arrived 30 minutes later at our hostel.  So long story short – 5 minibuses, 1 ferry, 1 lost tuk tuk and almost 10 hours later, and we were hungry.  Walking around that evening, we ran into one of the other couples from our original minibus in Vietnam.  Turns out, after they dropped us off, they stopped on the side of the road for no apparent reason and waited as well, arriving about the same time as us, but with about 10 less people in their minibus and not left in the middle of nowhere.

Phnom Penh is the capital and largest city of Cambodia.  It has about 2 million of Cambodia’s almost 15 million people.  But there isn’t much to do as a tourist.  We walked to the waterfront and then up to the S-21 genocide museum. 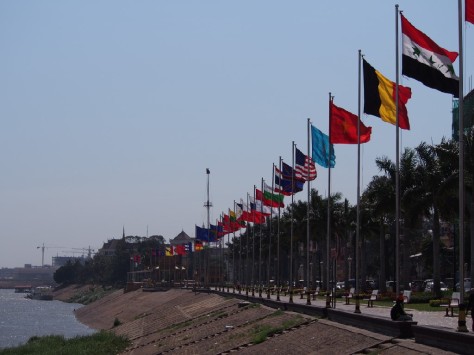 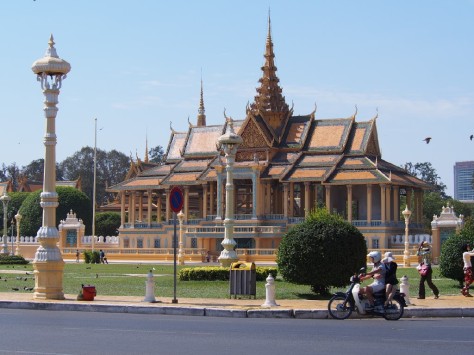 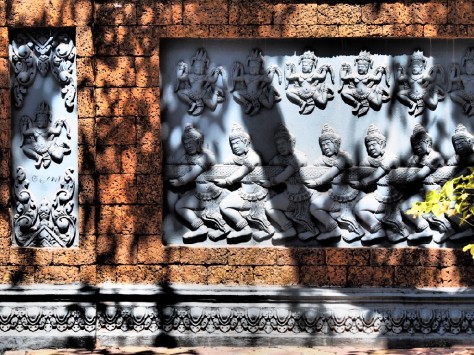 Ever wondered how to dry meat?  All you need is a chair and a laundry basket, and a little sun.  And maybe some flies. 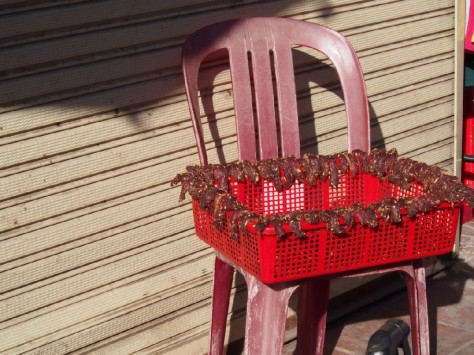 In the 1970’s Cambodia had a leader, Pol Pot, who thought education was bad (despite going to universities in France).  He uprooted everyone from the cities and forced them to walk to rural areas and work the land.  So Phnom Penh became pretty deserted.  At one of the old high schools, a prison was created.  Pol Pot sent people perceived as political enemies here, some just for being educated.  Some for being “lazy.”  The people here, men, women and children, were detained and tortured until they confessed.  Most who confessed, confessed to made up things, like working for the KGB or the CIA or to wasting too much fabric in their tailoring shop.  The museum is housed in the school buildings and has an incredible exhibit on what happened here.  There are thousands of mug shots of prisoners displayed, as well as the “confessions” they made.  Once the prisoners confessed, they were killed, either from the torture or when taken to the killing fields nearby.  Only something like 12 people survived this prison.  Guards were also killed, for leaning on the walls while on duty.  In total, it is estimated that about 2 million people died while the Khmer Rouge were in power.  Half from executions and half from disease or starvation. 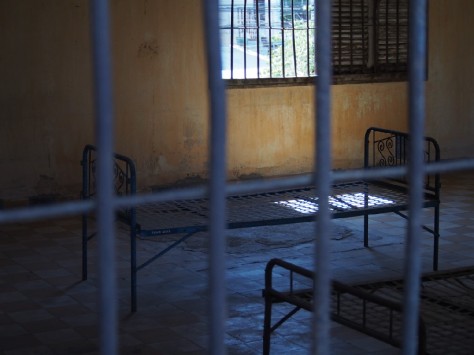 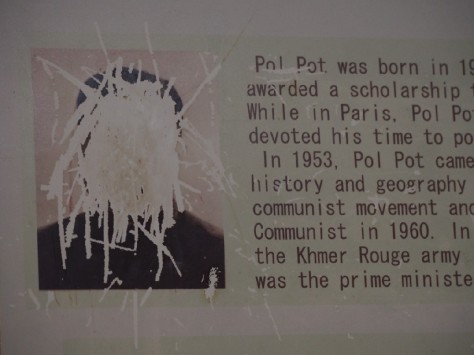 They also had a video at the museum of an artist who survived, interviewing some of the guards who had worked there.  The guards were mostly teenagers at the time and had been told the prisoners were terrible enemies.  So that was a pretty somber visit.

After, we walked to the Russian Market, which has nothing to do with Russia anymore.  Then we went back to our hostel and had pizza for the first time since Nepal. 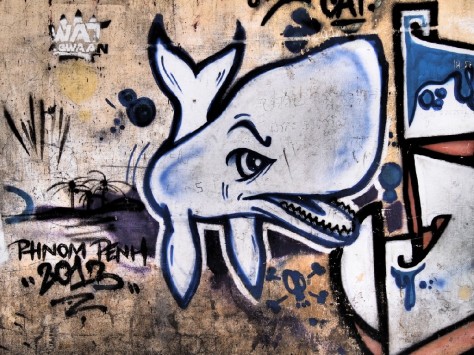 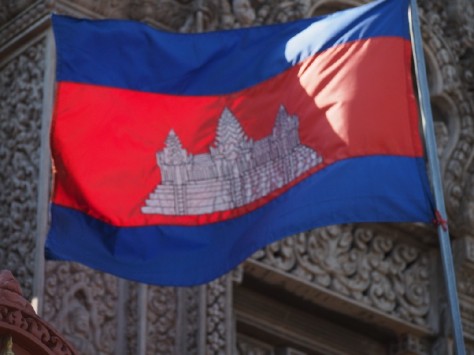 Our last day, we did a walking architecture self-tour.  It was a bit tough, as there weren’t any addresses on our guide and some of the buildings had been torn down.  But we found a book store and bought a book on Angkor Wat to prepare for next week.  We also went to the National Museum, which was mostly ancient sculptures that have been recovered from all over the world after being bought or looted from their original homes.

The next day, we boarded a real bus, – big, with only one person per seat and made it in a record 6 hours to Kratie, north and east of Phnom Penh.