Our train to the remote northeast was scheduled for 4 am. It didn’t leave that early, but it was only half an hour late. We could have taken a bus a bit later, but decided on the train as it was much cheaper and we heard it was a beautiful ride. It was a beautiful ride. But it was oh so slow. We had paid $3.30 for our Upper Class (as opposed to Ordinary Class = wood seats) tickets and were grateful for the soft seats as we bounced down the track. Apparently, the trains they use are slightly small for the track, allowing lots of wiggle room as the train jostles along.

The highlight of the train ride is the Gokteik Viaduct, a 1901 American-built structure. We stopped for about half an hour right before the bridge and thus were granted lots of time to take photos. Then we creeped along the bridge. It seems they must be very careful because the trains are already pretty loose and they don’t want to loosen anything on the bridge either. So you go very slow. Lots of photo time. The gorge below is beautiful, which stone walls and a gushing stream at the very bottom. 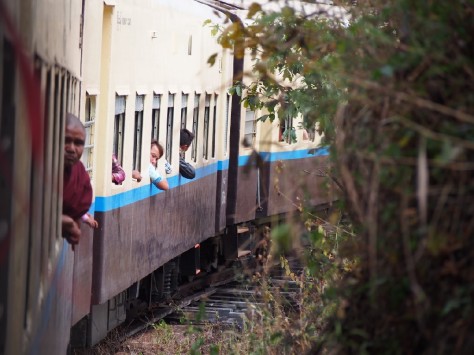 We arrived in Kyaukme only an hour after the scheduled time – around 2:30 in the afternoon. This is a town just one over from the main town, Hsipaw, where most people go trekking. Upon a recommendation from someone we met in Laos, we opted to go to Kyaukme (pronounced ciao-may) instead. There are only a couple of guesthouses in this town and we walked to the one we had been told about. Luckily, they had room and were able to contact the guide we wanted for our trek.

The next day, with Riki on a rented motorbike and me on the back of our guides’ bike, we set out for some Shan and Palaung villages in the mountains. We stopped for provisions at the town market and then set out. About three hours up windy and terrible roads, we stopped to leave our bikes at that village’s (Hu Kuat) chief’s house. From there we walked to Ban Hone and through Nuang Pyget (please excuse if misspelled – the map is a bit blurry). The villages have roads, but they are dirt and mostly suitable for dirt bikes and trucks in the dry season. We took the more scenic route.

The villages are not very old, but the people speak different languages. Some people speak Shan and some speak Palaung. Some speak Burmese too, some do not. So we didn’t expect any English. The houses are mostly metal roofed bamboo thatch, which looks liable to go right up in flames, as they have open fires in every home. The villages we visited all had monasteries and we visited a few, where we sat on the floor and drank tea. Have I mentioned there is a ton of tea? No? Well, we walked through numerous tea farms, which are set on very steep mountains and are everywhere. Which explains why they drink so much tea. Though maybe the British had something to do with that too. At one school, we were bombarded by children who all wanted to shake our hand and say good afternoon. It was a bit overwhelming.

Our last stop was Ban San, where we met the local brother and sister monks, had tea and a tour. There are only three monks in this village, but they have a huge building to worship in. We stayed with a family, who cooked us delicious vegetables, rice and chicken and let us sleep on their floor for the night. The open fire makes for a smoky house and it was cold, so many of the windows were shuttered. Not a good combination. At night, the family huddled around their portable DVD player and watched a movie, which must have been hysterical as they were laughing so much. We played cards with our guide, with a few family members observing our rendition of the game Jenga.

After an early awakening from the family rooster, we were again treated to delicious vegetables and rice before setting out for a few more villages. We really enjoyed learning about Myanmar and particularly the Shan culture from our guide. It was a great insight into a country where there are still so many conflicts. We were particularly close to some areas of unrest, but were lucky not to hear or see any rebels.

We set out for two more villages, Don Heik and Kyein Lau, where we ate lunch with a cute family and befriended two young kids who were not the least bit shy.

We reached our bikes and headed back down the same road, slightly delayed due to some intense road construction. Lot of ladies carrying baskets of rocks, which were covered in stinky tar and then more rocks. Quite a process, but will make travelling to this area much easier once its finished.

We stopped at a cool bridge on our way back and saw rice being planted. 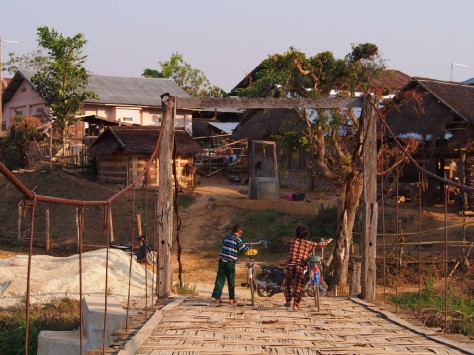 That evening, our guide invited us to his home for dinner, where we ate more delicious vegetable and rice. All in all, a great glimpse of a new culture.

Next up: Bus to Mandalay for a day before heading to Bagan (spoiler alert: bus is so much faster than the train, but costs more and contains vomiting locals)

One thought on “Trekking in Shan State….Kyaukme, Myanmar”