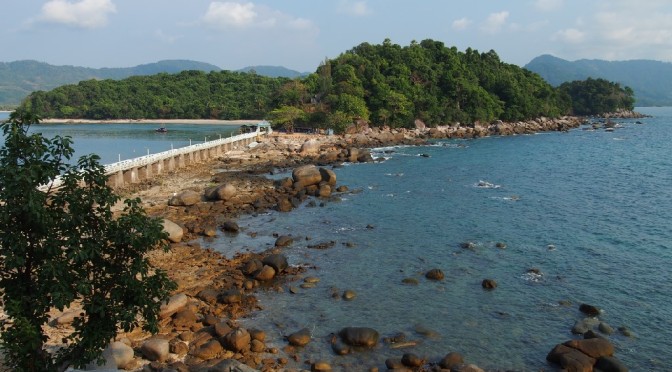 This night bus to Dawei left Mawlamyine at 6:30 pm and was pretty promising as the seats were pretty comfortable and were camouflaged. Felt really American. The only downside to this one was arriving at 4:30 am. This of course we did not know ahead of time and were reluctant to leave the bus when it was so dark out. Luckily, we had called ahead to a hotel and after a few poundings on the door from our driver, we awakened the desk clerk who checked us in and showed us to our room. We napped a few hours but still managed to wake up in time for breakfast. Our best so far – rice soup, eggs and bread. We met an American couple from Idaho and decided to follow their plan of heading south down the peninsula to some fishing villages and a pagoda, via motorbike.

First though, we went in search of a boat company to book our ferry down to the Thai border crossing. After walking in circles, we had found three companies all offering pretty much the same thing, a $70 12-hour trip, leaving town at midnight to catch the boat at 4:30 am. Pretty crazy, but we wanted to take the boat to see the mysterious Mergui archipeligo that is incredibly expensive to visit otherwise. So boat it was (and you can’t go by bus yet – not allowed for tourists). We returned to the first company (isn’t that how it always goes) because their English was better and seemed more professional. In the process of buying the ticket, we discovered that we could pay in US dollars and since we had stocked up on these before coming to Myanmar, and had yet to use any, and we were running low on Myanmar kyat, Riki took the motorbike back to the hotel to get them. While he was gone, I started chatting to the lady and discovered that for a mere $1 (yes, one) more, we could fly, on a 45 minute flight in premier class (whatever that meant) and arrive earlier. Seemed like a no-brainer. Spare you guys the joy of reading 1,000 words about how miserably long the boat ride was too (and the next day a ferry capsized near Mrauk-U and about 40 people were killed).

Plans all changed we continued south and poked around a fishing village before running into the Americans near a pagoda out on the water. 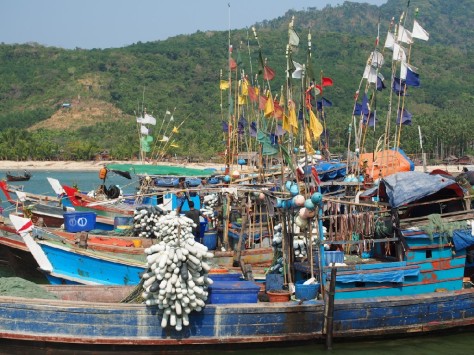 Now I’m not sure if it was the combination of knowing we weren’t taking a tremendously long boat ride, actually getting enough sleep after a night bus, or the shear beauty of the landscape, but I found the Myanmar I had been looking for. Sounds corny, but as we walked the length of the bridge to the almost-island (peninsula, I know, but it didn’t feel like that) pagoda, the water was clear, the people were friendly, and it just hit me. Everyone along the way had been waving and had the biggest grins to see us coming. Maybe they weren’t annoyed with tourists yet or its just the southern nature, because they get more sun and get to live along this beautiful coast.

We met up with the Americans at a beach and were joined by 5 rambunctious boys who spoke a few words of English, but were mostly interested in running and jumping in the sand and water, which was incredibly warm. 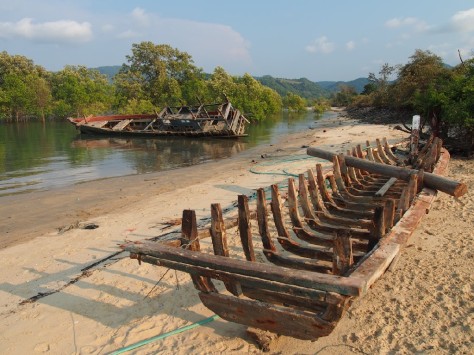 But you can’t have all that good, and not even it out with something bad. Just my travel karma talking. On our way back to join our new friends for a cold draft beer, we popped a tire. But within minutes of stopping along the road, 6 people on bikes had stopped and a small truck. Two groups were basically fighting over who would help us. Two students won and one took the bike with Riki on it down the road a minute to a small hut, while I rode with the other one. The hut was closed but student #1 managed to find the owner and get him to fix our tire. This involved taking the whole thing off as it was beyond patching, with a three inch tear straight across. Too hot, he said. Or two big Americans it couldn’t handle the weight. Student #2 (I feel bad, but I don’t think we got their names) spoke some English and was interested to know if we were Christians (I let Riki answer that one) as he was and his friend was Buddhist. It would have been great to hear more about that, but the language barrier was too big. Student #1 took Riki next door to the shop that conveniently had spare inner tubes for $2.10. He even paid 10 cents for the tube when Riki was too slow with his money and refused to be paid back. The guy fixing the tire requested 70 cents for the 30 minutes of work he put in, but I gave his wife the change after he refused the 30 cents extra I didn’t want back. The students didn’t leave us until we were back on our bike and headed in the right direction.

It was dark by the time we left and we missed the draft beer, but had an amazing display of generosity to replace it.

The next day we once again rented a motorbike and set off on another ambitious journey, to reach a beach further down the peninsula. We got about 45 kilometers down, right around where we were supposed to be and decided to head west toward the beach. An hour through some rather treacherous terrain, with me getting off the bike occasionally so Riki could get up or down a steep hill, we ditched the bikes when we ran into some locals who told us we could go no further with them. We headed up a trail, closely followed by some men and women carrying enormous loads on their heads. We were a bit worried about getting back as the other couples’ bike had overheated just as we had stopped, and ours seemed to guzzle fuel, so when we got a good viewpoint and realized how far the beach still was, we returned to our bikes, chalking it up to just a hike in the woods, without the rewarding swim at the end.

A bit exhausted, we finally got our cold draft Myanmar beers.

On our last day, we walked around town. Dawei is a port city, which is conveniently located near an old British beach spot.  It has only recently been opened up to tourists, hence its appeal to us.  There are not a lot of attractions, its just a town, a real town.  Not destroyed by tourists yet.  I really enjoyed just being there, not trampling through any pagodas or being harassed by touts.  It was calm and we could meander through the streets without being bothered (and hopefully not bothering anyone else).

We met up with the Americans that evening and hunted down more draft beer, as our previous joint was closed for some reason. It took awhile but we found what appeared to be a Dawei beer garden, named “Seven Zero.” A good sign when the name is in English, but that didn’t translate into the menu, and while the hand gesture for draft beer is universal, the hand gesture for chicken fried rice is not. Luckily, they actually had wifi and our new friend was able to show a picture of a chicken and some rice and gestured to mix it together. Good enough.

I probably would have tried to stay longer in Dawei if our visas weren’t running out and we weren’t sure if we could cross after they expired, Kawthong being a relatively newly opened border-crossing. It was sad to leave, but we had booked the flight and we were ready for some beach time just over the border in Thailand.

Next stop: Ranong and Koh Chang, Thailand after a luxurious premier class flight and a pain in the ass border crossing.