Unbeknownst to us, our 7 hour bus ride from Sepilok to Kota Kinabalu had passed right by the epicenter of a 6.0 earthquake that occurred just a few hours before. We knew when we were near Mt. Kinabalu, the tallest point in Southeast Asia, but the weather was pretty dreary and all we saw were tons of cars and people along the side of the road.

But the first thing the receptionist asked us at the hotel was if we felt the earthquake. We didn’t have a clue. Turns out almost 20 people have died, at least 6 Singaporean children. And who to blame? The westerners who a week before stripped naked for a photo at the top of the mountain and disturbed the spirits, or something. Or at least that’s what one state official has been quoted saying. They’ve been arrested, detained, and face up to three months in jail if found guilty. More than a week later. (Update – they’ve been released after spending 3 days in jail) For indecent exposure and causing an earthquake? Seriously. No, they should not have posed naked, as its offensive to the people, who regard it as a sacred place, but insinuating that they are responsible for the earthquake takes it a bit too far. Also, this tidbit found in the local paper the same day really irks me. (Maybe I should wait to post this until after we leave Malaysia)

The quickest way to get to Brunei, besides flying, is by ferry. A bus involves three border crossings because of the crazy country border lines – due to the British slowly taking strange shaped parcels of land. You go into Brunei, then back into Malaysia, and then back into Brunei (there’s only one road). We don’t have enough space in our passports for all these extra stamps, so opted for the faster and more scenic boat, with only one border crossing.

The boat ride was pretty pleasant. We stopped on Labuan, an island, which is Duty-Free, for a few hours before boarding our next boat to Bandar Seri Begawan (BSB), Brunei. There, we bought a bottle of Cuban rum, as Brunei is a dry country (with Sharia Law) and we planned to have a little celebration for Riki’s thirtieth birthday the next evening. This involved filling out a special customs form, which was supposed to be kept with the bottle at all times.

Upon arriving at the ferry terminal outside BSB (the capital), we walked out to the main road to look for the bus. There are only about 50 taxis in the country and none of them were at the ferry terminal. After a few minutes walking down the road, a bus came along and picked us up. After changing buses at a nearby strip mall (bus station), we headed down the coast for about 20 minutes before being dropped right in front of our hotel. The kindness of everyone we met really helped us get to the right spot. Random people showed us where to get the bus, told us which bus to switch to, and when to get off the bus. So many helpful and friendly people. Not many tourists here, and we were soon to discover why.

Brunei has just over 400,000 people, in the whole country. It is largely Malay based and Muslim. Brunei gained its independence from Britain in 1984 and has developed extensive petroleum industries (90% of its GDP). Hence, it is very rich. But it is a country where homosexuality can be punished with death, by stoning, a law just passed in 2014. It does not let its citizens consume alcohol and there is no freedom of the press. Sounds rough, but the people pay no income tax and the cost of living is pretty low. And they get an average of 6-7 hours of sunlight per day. Highs and lows.

The bus ride into town was unlike what we are used to in SE Asia. Large houses, with wide lawns lined the streets. Multiple cars sat in every carport – nice cars. We arrived at our hotel, a few kilometers outside of the city, but right along the water. From there, we checked in and managed to glean that we could take a water taxi into town. So we walked down to what we thought was the pier and asked someone to help us hail one. Luckily, we were close to the “gas station” (hose with plastic buckets to cart into the boats) and waited only a few minutes for a boat to refuel and pick us up. And then we high-tailed it into town. Which was amazing! But very uncomfortable. It was only a short distance, but we sped as though racing, through the village on stilts along the waters’ edge and back across the river to the center of town. 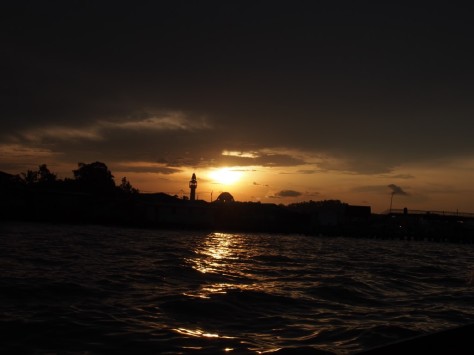 And then it got strange. We wandered the short distance to the big mosque and around the main downtown. It was empty. Devoid of people. Yes, it was Sunday evening, but it was not dark yet. Modern buildings mingled with older, more run-down low-rises. It seemed like a city on the verge of booming, or just on the decline. It was tough to tell. Like nowhere else we have been. It was even hard to find somewhere to eat. There seemed to be only a handful of restaurants – and nothing that really stood out.

On Riki’s thirtieth birthday, we once again got a water taxi into town and tried to do a bit of shopping. Like Malaysia, mall culture seems to be very prevalent. There was one souvenir shop along the waterfront and a large, modern mall with sparsely populated stores – which mostly seemed to be selling phones.

We walked to the Royal Regalia building, where things of the Sultan (yes – he rules here and is highly revered) are housed and displayed. We explored rows of gifts from different countries – anything from paintings to intricate models of Angkor Wat to lavish tea sets. Unfortunately, photography was only allowed in the lobby. 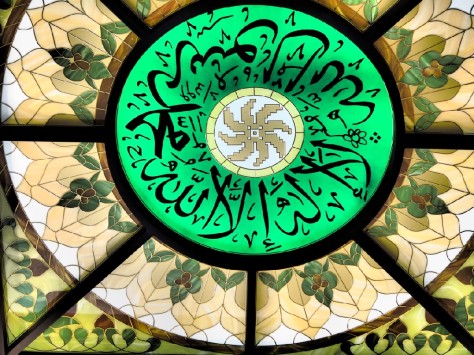 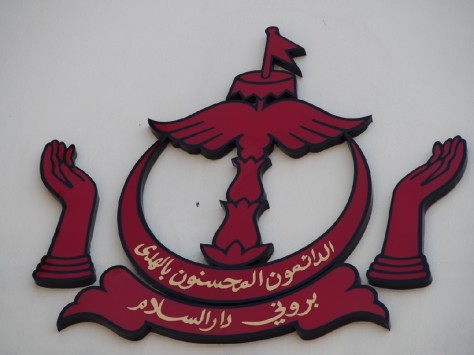 Next stop, the water village across the river. Having ridden through the night before, and assuming the B$50 offer for an hour-long tour was a bit overkill, we opted to walk along the raised boardwalks between the scattered houses. Like many communities over water we have visited, this one was on the weathered side. The walkways were precarious at times, making us jump at moving boards and shuddering sounds that shouldn’t come from under your feet. A strange contrast to the city just across the river. 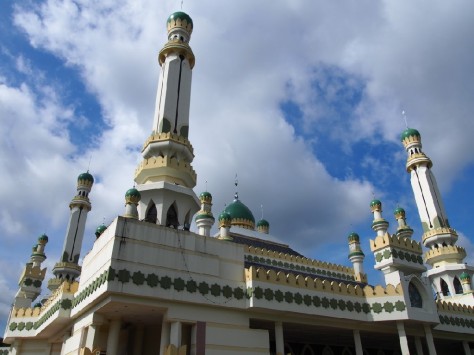 Just as we were finishing a late lunch/early dinner, the skies began groaning and darkening in prelude to the coming storm. We rushed for a water taxi back to the hotel and spent the rest of the night watching videos and drinking our Cuban rum. Not exactly a normal way to spend a birthday, but with no bars and barely any restaurants, a night in, and out of the heavy rain was just right.

The next morning, the hotel’s owner gave us a ride to the bus station (extra lane along the water front with no signs) for our 4 hour trip west into Sarawak, Malaysia. Though is was only a 48 hour trip, Brunei was an interesting place, teeming with contrasts – to itself and to our other stops.