A continuation of our 3 week road trip this summer in Spain.  Be forewarned – this is a long one, but the pictures from Barcelona at the end are worth it. Promise.

The morning after the Spaniards’ wedding, which was the catalyst for this whole trip, we got back in our rental car and headed east toward Bilbao.  Luckily, we consulted with our hostess before we left and she recommended an excellent stop along the way, Santillana, which was about midway between Infiesto and Bilbao.  The views along the way were incredible and when we reached Santillana, we discovered a historic town, where we had an excellent lunch and stretched our legs along the cobble-stone streets before getting back on the road. 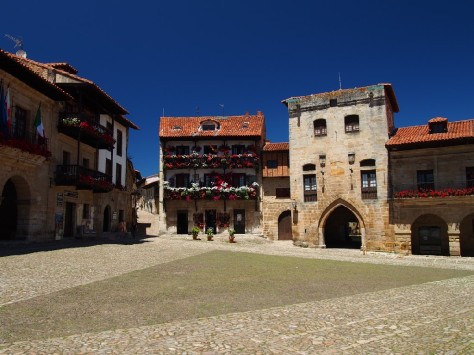 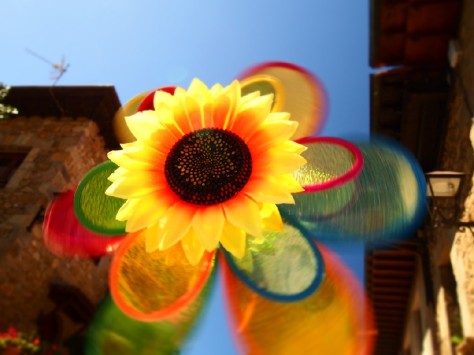 I have no idea where I found out about the Vizcaya Bridge, but I’m quite glad I stumbled upon it in my research before our trip.  Just north of Bilbao, the bridge spans the Nervion River.  It is a UNESCO site in the Industrial Heritage category, the only one in Spain. Designed by Alberto Palacio, one of Eiffel’s disciples it is essentially a gondola over the water that carries 6 cars and something like 200 people.  The gondola trip takes 90 seconds and costs 35 cents for pedestrians.  However, if you want to take an elevator to the top and walk across, it costs 7 Euro and can take almost an hour, in my experience.

We continued inland and reached Bilbao late in the afternoon.  We checked out the old quarter, or Casco Viejo that evening and meandered along the waterfront.  With the Guggenheim being the only main attraction we wished to see, we only scheduled one night in Bilbao.

The next morning we walked to the Guggenheim, enjoying the riverfront along the way. 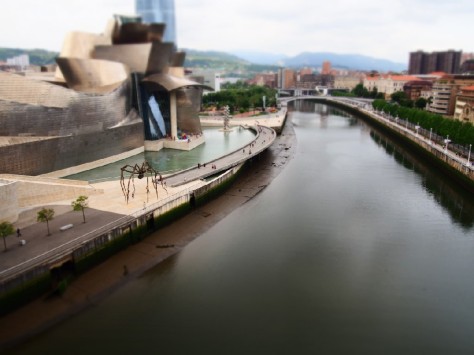 On our way back to pick up the car, we saw an unfortunate bike accident where a lady went head first into the pavement and wasn’t moving.  My first thought was to call 911, but then of course realized that wouldn’t work in Spain and made a mental note to look up the proper number (112 in case you were wondering).  Luckily, there were many other better equipped people who rushed to her aid.

We continued south east and stopped for lunch in Puente de la Reina, where they have a medieval bridge.  This was a spontaneous stop, something we would not have seen had we been stuck on a bus, or plane or train.  The town is just south of Pamplona, which is famous for the Running of the Bulls, which was only two days away.  We decided to skip Pamplona to avoid the crazy crowds and spend more time in Barcelona.  Though we did see a fair amount of people headed there or returning from the festival. 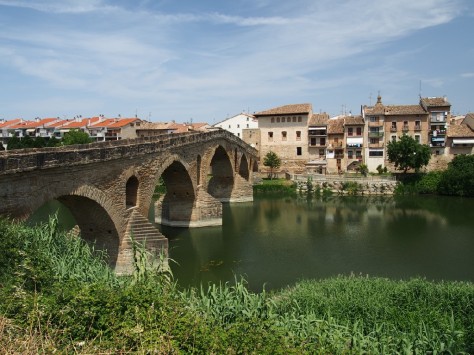 I spent an incredible amount of time planning this trip, having 3 companions and a set amount of time, it was quite different than what I am used to.  When I asked my parents where they wanted to go, mostly I got vague answers that centered around museums and art.  But when I asked Riki, he said the desert.  And I thought he’d gone mad, until he showed me the pictures.  Even then I didn’t really believe a desert could be located so close to the French border.  But it is, and that is how we ended up in Olite.

Olite is a tiny town with an incredible palace.  The palace is almost entirely reconstructed since a fire in the 1800s, but it is still an amazing site to see and in typical fashion, my photographer was the last one out at closing time. 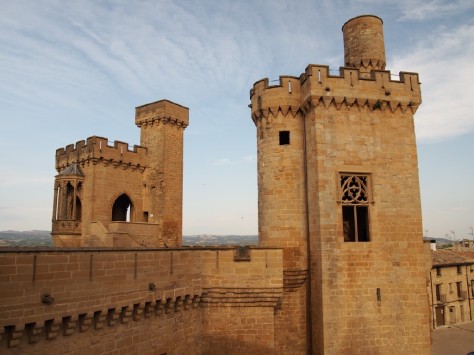 That evening, as we sat on the main plaza right in front of our hotel, we were inundated with rain and privy to an amazing lightning storm (so much water that our room’s windows started leaking). 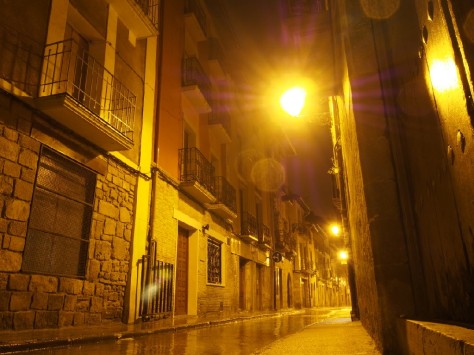 “The light will be better” is a phrase I have grown accustomed to.  And a phrase that has changed many a plan around.  This was no exception.  Our overnight in Olite allowed us to get up early and head to Bardenas Reales, the desert Riki wanted to see, “when the light would be best.” And come to think of it, so would the temperature.  The landscape is incredible and the abrupt entry into a desert environment is daunting.  The unfortunate thing is that this vast expanse of arid land was man made by deforestation.  A unique habitat was created however, and is now protected.  Evidence of the massive rain storm was scarcely visible when we arrived and even less so by the time we left a few hours later. 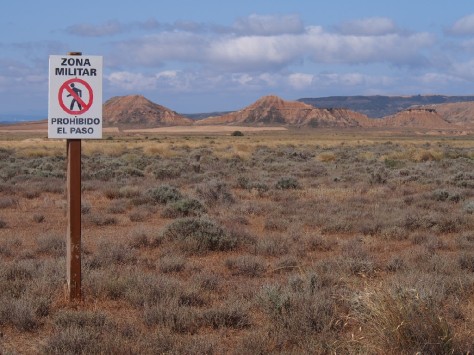 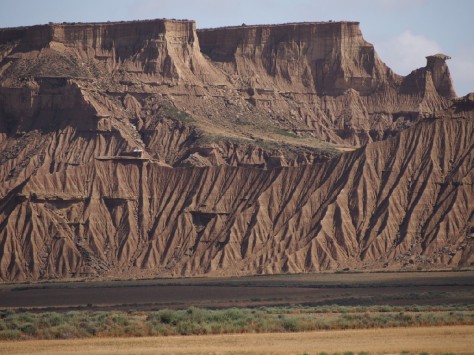 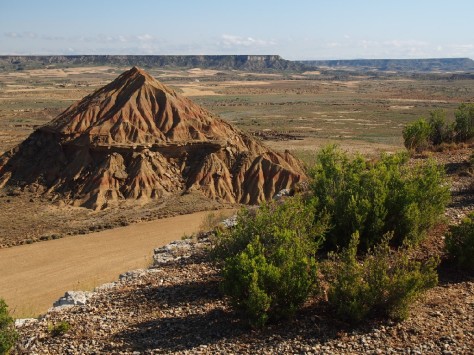 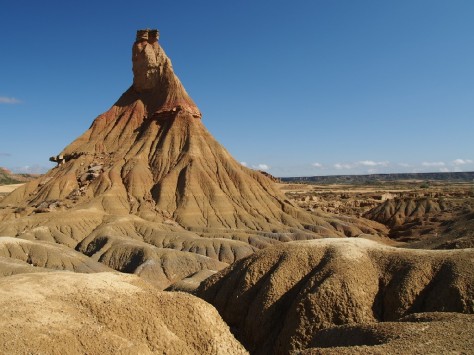 We stopped briefly in Tudela for a supermarket lunch, as it was not yet 1:00, so none of the restaurants had food yet.  Then we high-tailed it straight to Barcelona, where we promptly ditched the car for three days in favor of walking and public transit to avoid the maze of one way and forbidden streets. 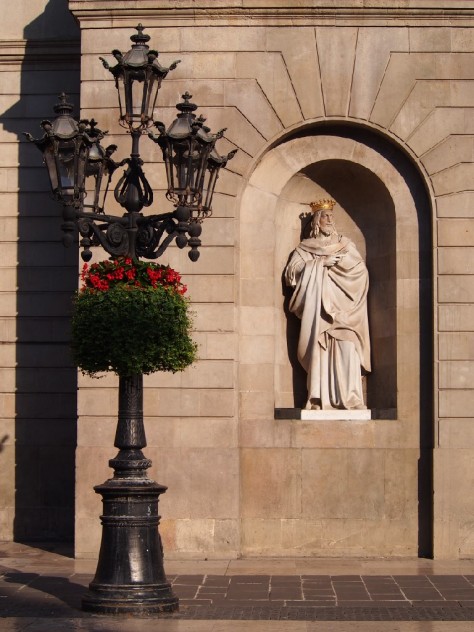 This being my third trip to Barcelona, it would seem I would be an expert.  But, no.  Barcelona is changing rapidly and I’m not sure it’s for the best.  They simply have too many tourists.  The city stopped issuing licenses for new tourist accommodations last year, but that just drove the prices up.  The tourists are still coming, and it’s obvious why.  Barcelona is a cool place, set right on the water, with an expansive beach, it offers unique architecture, delicious food and loads of culture.  A perfect combination that they are worried will turn them into a Spanish Venice, so dependent on tourism that the locals and their businesses are driven out.

La Sagrada Familia is changing as well, but let’s be honest, it’s about time.  They plan to be finished in 10 more years (144 years after construction began).  The ticket process has  changed since my last visit (which was only two years ago).  I had assumed we would go there early in the morning, wait in the long line and get our tickets for later in the morning.  So when no line awaited us as we approached the entrance I was a bit confused.  And when the sign said the next entry wasn’t for 5 hours, I was annoyed that I didn’t check before.  It seems they have gone digital and almost everyone buys their tickets online ahead of time.  We got incredibly lucky though, a group of 4 had canceled and we were able to enter 45 minutes later, which gave us time to grab breakfast before our scheduled entrance.

This was my third visit (my first being almost 10 years ago) and it’s incredible to see the difference.  On my first visit, the nave was completely covered in plastic sheets and we could only walk in a single file line around the edge.  The facades were not nearly as complete and the towers not as tall.  Now we were able to wander the nave with our audio guides with 1000 other people gawking at the columns, glass and structure.

One of the most interesting parts of La Sagrada Familia is going to the museum in the basement to see all the models and how Gaudi designed the building.  It is too bad he won’t get to see the completion, but he would have had to live to 174 years old.

We followed up our visit to La Sagrada Familia with another Gaudi creation, Parc Guell.  However, things have changed there as well and all the tickets for that time were sold out already and we couldn’t get in for another 5 hours.  So we walked around the outside, toured the Gaudi house museum and went home for a quick siesta before hitting the streets again to wander. 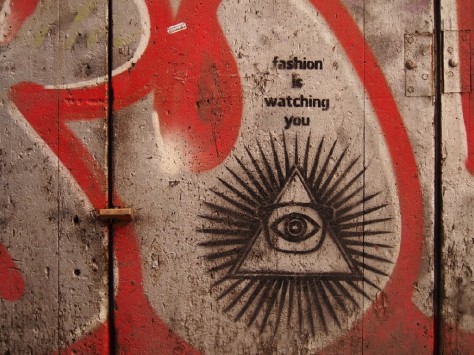 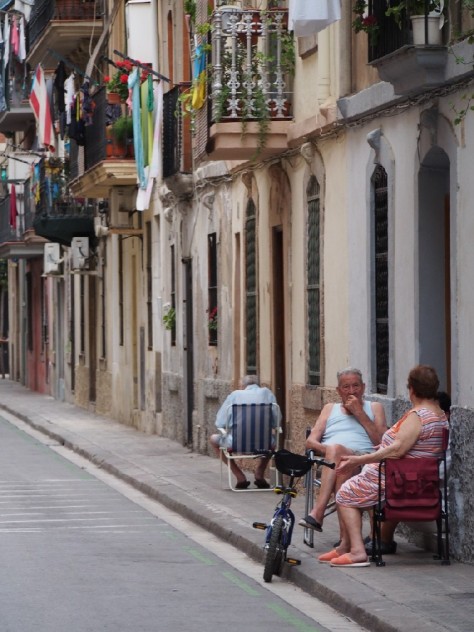 My parents spent their last day in Barcelona at more Gaudi buildings, where Riki and I had already been on our last trip.  We spent the day wandering, taking pictures (him), shopping (me) and laying on the beach because the water was too chilly to swim (for both of us).

Coming soon: Part 3 – South – Granada, Cordoba and up to Toledo