Two weeks before our 8 day West Texas camping adventure, Riki tells me that he’s only slept in a tent twice.  Not sure how that has never come up before in the 13 years I’ve known him, but it didn’t, and it made me slightly nervous.  But, so you don’t have to read to the end to find out if he made it – I’ll just tell you, he’s a pro.  Especially in the cooking category.  Who would think to make pad thai or coconut corn chowder on a little backpacking stove?  Riki did, and it was amazing.  It helped that we borrowed some very thick sleeping mats, too.

Day 3: South Rim hike. 8 hours round trip. Pretty steep on the Pinnacles trail until Emory Peak and then a more gradual incline. Came back via Laguna Meadow Trail.

The view from the South Rim is astounding, definitely worth the hike, though the last few hours down were tough.  We saw people coming down who had camped up in the mountains somewhere. I can’t imagine having to carry even just enough water up some of these trails. 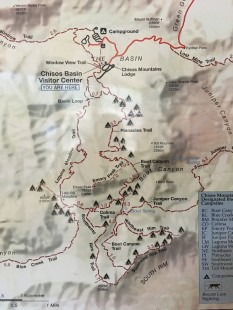 The end of the Lost Mine Trail turned out to be a gorgeous ridge with nerve-wrackingly steep sides.

Day 5: Drove to Castolon Visitor’s Center.  Hiked into Santa Elena Canyon.  Had to remove our shoes to get across a Rio Grande tributary to get into the canyon. Ate lunch in the canyon.  Part of Mule Ear’s Trail – found a very sun bleached $10.  Drove to see Burro Mesa Pouroff. Walked to Sam Nail Ranch. Nighttime walk near the Chisos Basin Visitor’s center with a ranger.

Day 6 Thanksgiving: Left Chisos Basin and headed west out of park to Terlingua. Explored the cemetery, ghost town and some art galleries. Drove through Big Bend Ranch State Park and up to Marfa, which was mostly all closed up.  Continued to Alpine.  Dinner at the only restaurant open – the Panda Buffet.

Day 7: Explored Alpine, which has lots of interesting little shops.  Drove north and stopped at the Chihuahuan Desert Research Institute.  Continued to Fort Davis and the Davis Mountains State Park.  Early dinner in the old drug store and then up to MacDonald Observatory for the star party.

Day 8: Took I-10 back to Austin, poking around little towns along the way.

Overall, we had a great trip.  We probably could have stayed longer in Big Bend, but it was really nice to get somewhere that had showers.  And to eat something besides sandwiches for lunch.  We were lucky enough to have great weather the whole trip and it only really got cold at night.   Despite it being Thanksgiving week and the park being “full” we often found ourselves alone in the wilderness.  I can see how the summer must be unbearable, despite the amazing scenery.  I had no idea of what to expect before heading out there.  Texas just keeps on surprising me.