We took a 1.5 hour minibus to the Phuket airport from Phang Nga, which was uneventful, except for the rude guy who took up two seats and then spilled his coke all over the floor. We were very early for our 7 pm flight, but the airport had free wifi and we were able get some research done and I even finished a few blogs. The Phuket airport was packed with tourists, which made for very interesting people-watching. We had plenty of time to explore, but this also meant we needed to eat. Having depleted our snacks, we went to a ‘New York deli’ and tried to order a chicken sandwich.

Ok, but you don’t have a chicken panini.

So I can’t get chicken on panini bread?

My only other option was a sliced meat resembling ham, so we left and I decided to break my super-chain rule and went to DQ for some ice cream. But then the guy in front of me had a very similar problem. He wanted a chocolate sundae, but they didn’t have any more plastic cups for the sundaes. But they had ice cream, and chocolate, and paper cups of the same size. But they couldn’t put the sundae in the paper cup because that was only for blizzards. So he left. I ordered a mango and sticky rice blizzard and was thankful I even got to eat.

Arriving in Jakarta at 10 pm, we had arranged for our hostel to pick us up as the public transport options were not available that late. We paid our $35 visa fee (which is being suspended later this month, just a few weeks too late for us) and went out to find our driver. But he wasn’t there. Eventually, we got in contact with the hostel, they called the driver, woke him up, and he hurried over to collect us. Not a great intro to Jakarta.

Luckily, the next day was much better. Many people skip Jakarta, as it is big, bustling and hectic. Fortunately, that’s right up our alley. We arranged for our train to Yogyakarta the next day and then headed out to wander the neighborhoods around our hostel. Jakarta has some Dutch influence from when it was an influential trading center in the 18th century.  It was later occupied by the Japanese in 1942.  The Dutch tried to return after the Japanese fell in 1945.  They were met with resistance, but still managed to prolong Indonesia’s independence until 1949.  Indonesia is now made up of thousands of islands with many different cultures.

Within minutes of leaving our hostel to explore the neighborhood, we had heard “Hey mister” a dozen times and were a bit perplexed. Where did they learn this? Why not just “Hello.” So nobody was talking to me, just Mister (Riki). It was a bit strange. But we soon realized that this was all in a friendly way – nobody wanted to sell us anything or scam us. Just a greeting. Big smiles, lots of waving and many curious looks. Not many tourists walk the small alleys there. 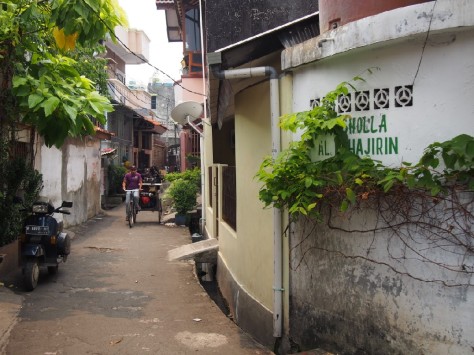 Then we walked to the old center, around a very crowded square (as it was Saturday – it was packed with locals) and where we were less noticed. Locals were renting bikes which came with matching sun hats to pedal around the plaza and take pictures. 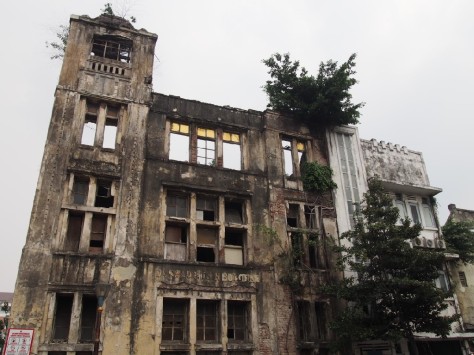 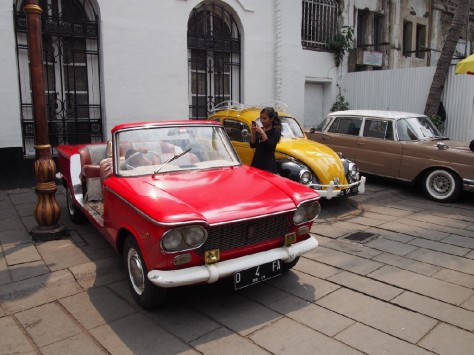 We navigated back to a big bus stop and found our way south to the National Museum.

This museum may be worth it in itself to visit Jakarta. We arrived only 2 hours before closing, and we had to hurry through to see everything. It is very well laid out, with different sections for all the different cultures of Indonesia. I had no idea they were so different. It was a great introduction to the country for us, complete with good English translations. We have been to so many terrible museums on this trip, but this one is incredible. And it costs less than $1 for foreigners. A favorite section had miniature models of all the different kinds of houses around the countries. 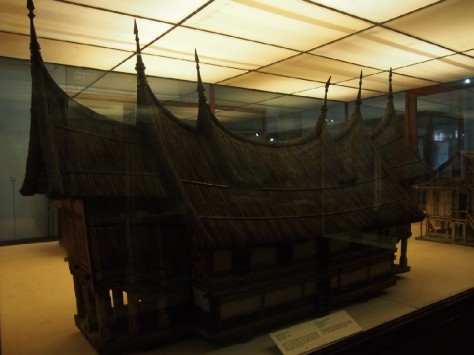 But there were sections on language, music, religion and clothing as well. The penis sheaths being particularly amusing. 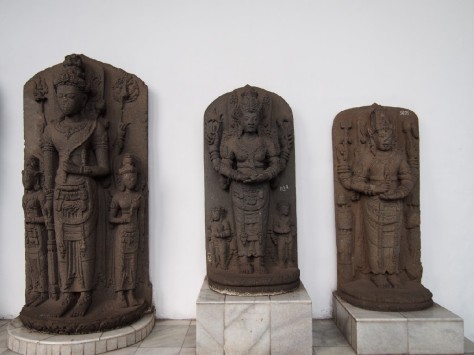 The next day we took a walk around a neighborhood that was heavily affected by the riots in 1998.  After the Asia financial crisis in 1997, Jakarta became an epicenter for violence and crime.  At one point, four students were shot by security officers at a university.  This sparked riots that lasted for four days, damaged about 6,000 buildings and killed about 1,200 people.  There is not much left to see now, but we did notice that many neighborhoods still have tall gates at each street, presumably to curtail the spread of violence. 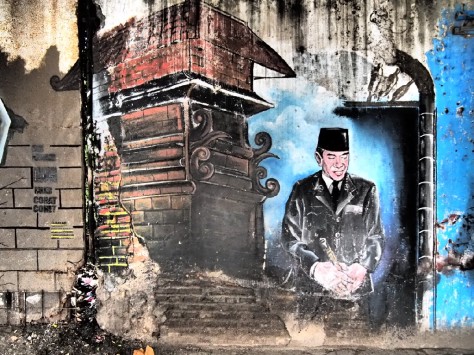 We then headed to the train station for our 8.5 hour trip to Yogyakarta, which was smooth, but incredibly uncomfortable on hard seats that were very upright.