We arrived in Kratie in northeast Cambodia after an uneventful 6 hour bus journey from Phnom Penh.  It is a tiny town, but is the capital of the province.  There is really not much happening here, but its a good stop over for our next destination, and they have freshwater dolphins nearby!

We checked into a cool hotel, housed in two old raised wooden structures with mosquito nets and unfortunately, an incredibly confused rooster.  If it weren’t for the rooster crowing as often as every 10 seconds (I timed him) from before 4 am until 6 pm, this place would be charming.  Ear plugs did little to drown him out and I even downloaded a noise making app just so I could sleep. 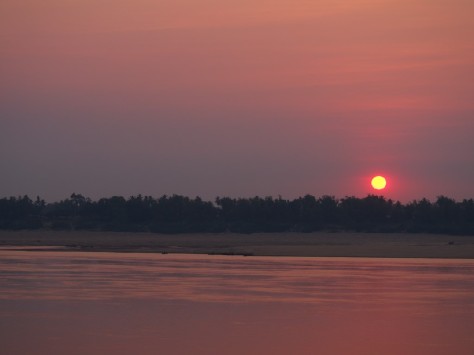 Our first day we took the ferry across to a small island in the Mekong River.  Ferry means creaky old wooden boat with a small awning and a very loud motor.  It drops you and the 10 or so other people it can fit at the edge of a long sand bank.  In the wet season, I imagine this is completely gone and the boat can go much closer to shore.

The island of Koh Trong, which is little more than a sandbar, doesn’t have electricity, except for what is provided by generators.  There is a 9 km loop around the island that you can bike or walk, dotted with wood stilt houses.  The interior of the island is mostly farmland.  It is an incredible contrast to just over the water in the town.  We opted to walk and spent the next few hours meandering along waving at the small children who were more than excited to yell ‘Hello’ at us.  While waiting for the ferry back to Kratie, we ran into a French couple from our bus.  We taught them a new card game and agreed to meet up later for dinner.  We only know a few card games and unfortunately, I tend to lose. 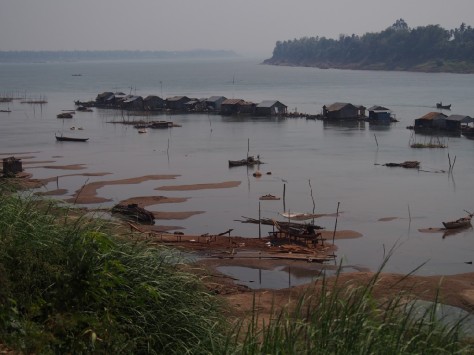 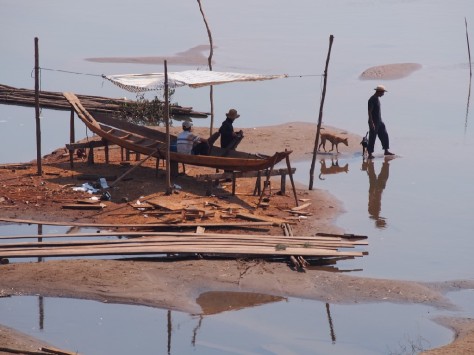 The next day, we rented a motorbike and drove about 20 km to the north.  We stopped at a place where people have built wooden structures over the water for lounging and swimming in the rapids.  For about 25 cents, you can enter, walk across, hang out in a hammock and picnic.  We were intrigued and paid just to go in and see what was going on.  It was Saturday, so there were lots of locals and naked kids jumping in and out of the rushing water.  We walked to the end and onto a sandbar, where some local boys were delighted to let Riki photograph them doing somersaults and flips into the sand and water.  The structures must be temporary, as the water rises a lot in the wet season and they were only a few feet above the water.  A lot of work to do just to have it destroyed come rainy season. 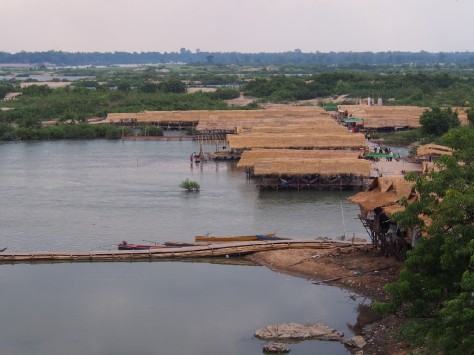 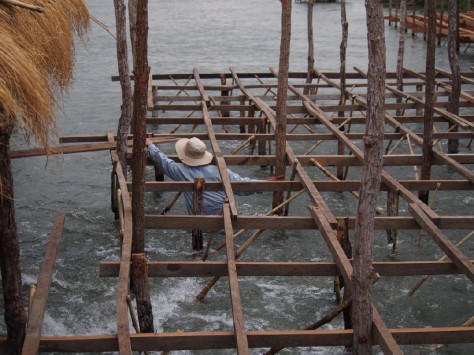 After, we went south 1 km to the location of the Irrawaddy dolphins.  We paid the $9 per person (very steep) to get a boat for one hour on the water.  With potentially as few as 20 dolphins left in this area, we were skeptical that we would see any.  But our 3 pm arrival seemed perfect.  A tour group was leaving and before we even got in the boat we heard and saw a dolphin surface to breathe.  The dolphins stay in this area of the river because it is protected from the current and pretty calm.  We spent the next hour craning our necks back and forth as we heard them exhale before we turned to see them.  Just as we were leaving, it seemed to be feeding time and we were able to watch a few dolphins skim the surface chasing small fish.  To say it was magical sounds corny, but it was pretty awesome.

Our last stop in the way back to town was Phnom Sambok, a small hill with a monastery on top and a decent view of the Mekong River.  As we pulled in, we were greeted by a curious monkey who was in the middle of licking and inspecting some push bikes at the base of the stairs.  He wasn’t too keen to be interrupted. 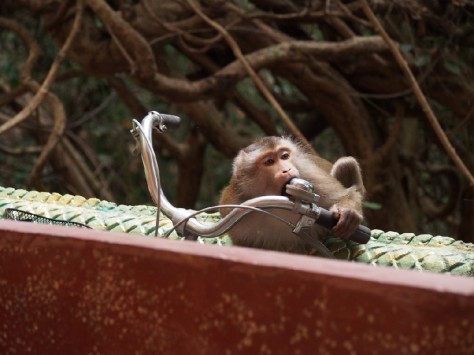 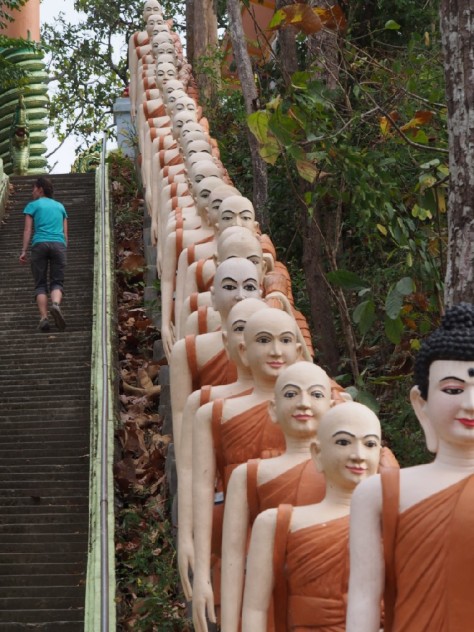 On the way back to Kratie, we pulled over and bought grilled bamboo shoots stuffed with sticky rice and a few sweet beans, which this small village is known for.  It is eaten at all times of day as a snack.  We took ours back to devour in town along the river.

There are not as many travelers further from the main cities, and this was very apparent on our next leg, as we had to take a much smaller bus to get further northeast.  It took us two hours to actually leave Kratie, as we drove around picking people up, stopping to get gas, returning to the bus station and then ultimately tying two motorbikes on the back of our little minibus.  In true Cambodian fashion, we packed 20+ people in and were off.  Eight hours later, we arrived at another small capital town, Banlung.

We met up with the same French couple from Kratie, played more cards and planned our next few days.  Many people go for 2-3 day treks here, but as Riki wasn’t feeling well, we opted to stay in town and do day trips at our own pace.  Our first spot involved a long walk through the outskirts of the city to a lake, presumably a crater as it is almost perfectly round.  We could have walked along the main road, which was busy and boring, but one of our maps had a dashed path connecting the town and the entrance to the lake.  It took us through a small village next to the town and then out into fields of dried crops.  Somewhere in the midst of these fields, someone had decided to start a small fire, a pretty standard practice here.  People burn everything, everyday.  Paper, food scraps, plastic, everything.  It makes for a odorous evening, when small fires burn all along the roads.  They also burn the undergrowth and you can frequently see black ash-laden ground under fruit trees and along fences.  Well this fire had gotten way out of control.  There were two fire trucks on the scene when we walked up and numerous bystanders.  They were nice enough to let us up on the truck to get a better look, as there was nothing they could really do.  Fields and fields of dried plants were crackling away.  One family was hosing down around their house in hopes that it wouldn’t burn that close. There is not a lot of water to spare either.  People have cisterns of water if they are lucky, which are refilled only when possible.  It is the dry season after all. 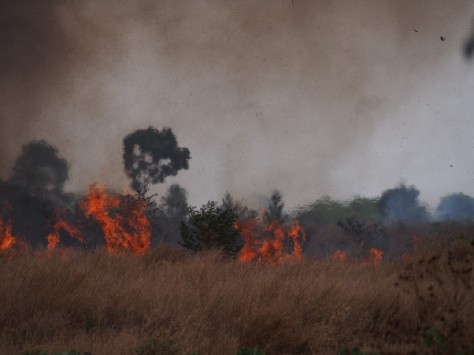 We continued along the very dusty road/trail to the lake, where we took a quick dip as the sun had hidden behind some clouds and it was a bit cool.  We walked back the same way a few hours later.  The fire was pretty much smoldering, except for a few parts and it had come quite close to the family’s home.  Seems very obvious to me how to prevent this from happening. 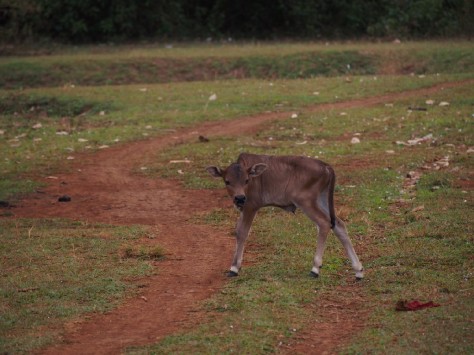 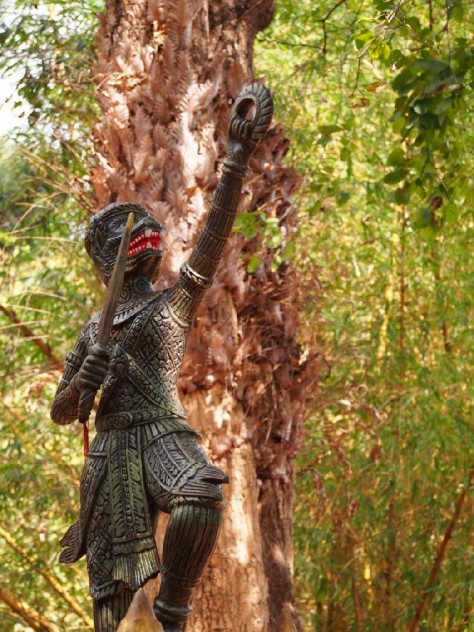 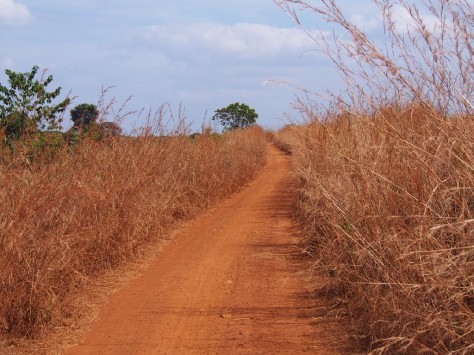 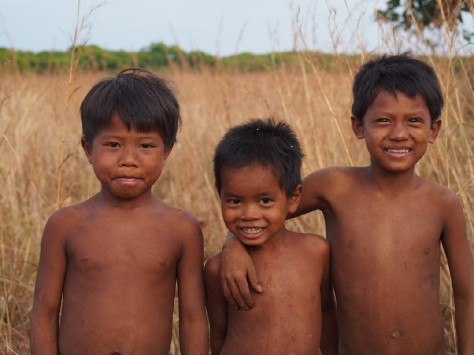 Our last day, we rented a pink motorbike and visited three of the nearby waterfalls.  The way to the falls is scenic and passes through some outlying villages of Banlung.  Everything within 10 meters of the road is covered in a thin layer of rich red-brown dirt – plants, roofs, goods for sale, everything.  By the time we reached the first waterfall, my exposed ankles were a similar color, not that much different from the smooth brown skin of the locals.  There was a wobbly cable bridge to reach the swimming area and we watched as some monks de-robed and played in the water.  The water was pretty cold so we just stick our hands in and tried to scrub the dirt from our skin.  But to no avail, as 3 days later, I still have a lingering “sock tan.” 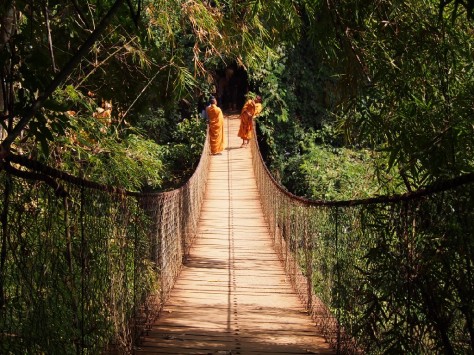 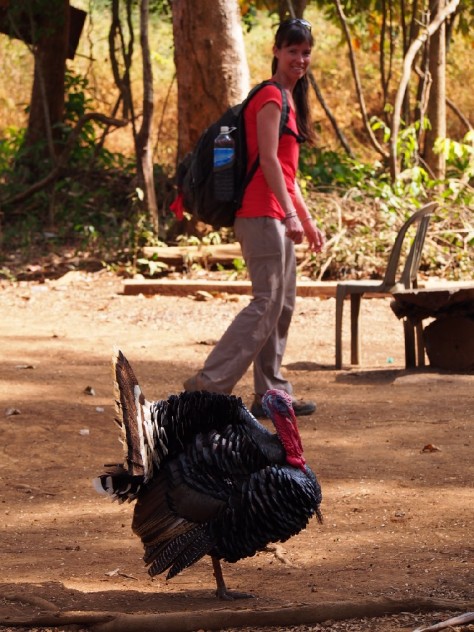 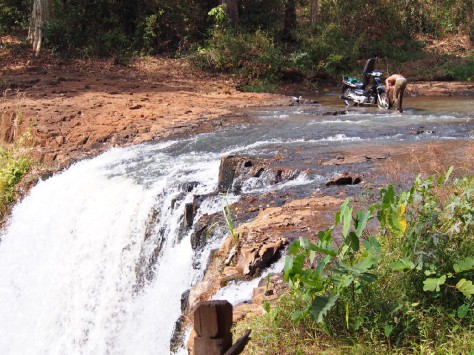 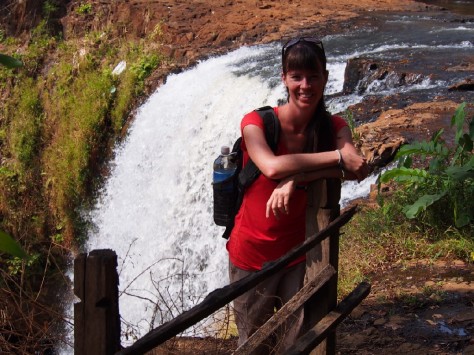 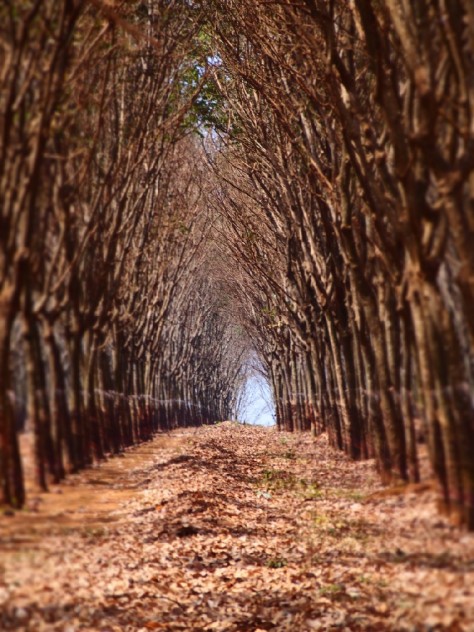 We booked a 6 hour journey with our guesthouse to Siem Reap, involving a transfer where another minibus “will be waiting at the side of the road for you.”  An ominous sentence, so we prepare with extra snacks and the Allegiant book-on-tape.