Spoiler: Monkey pictures near the bottom

Because of our swift progress through Sarawak, we ended up having a little over a week to spend in Kuching. A 5 hour boat trip in the rain from Sibu left us at a ferry terminal far outside the main city. With no bus option and no information on further transport, besides the conveniently located taxis. This has been my biggest pet peeve about Borneo, the lack of adequate public transportation or the lack of info about it. In Kuala Lumpur, Malacca and Penang, the buses had schedules, routes and posted fares. Buses could be booked online for long distances and everything was straight forward. The complete opposite appears to be the case over here. We have a tough time even figuring out if there is even a bus, and if there is, when it runs and where to get it. In Kota Kinabalu, there is bus to the airport, but it stops at 8 pm and appears to be privately run (not sure about this as we couldn’t take it because our flights were too late). In the state of Sabah, we found outrageous price ranges for the same journey and no particular schedule. We’ve waited an hour along the side of the road, in the blazing heat because we had no other option. And then there’s just the lack of options. Everyone must drive because the public transit is failing, or maybe the public transit is failing because everyone drives. We’ve never been so clueless about how to get around, as even the locals don’t always know the system. Anyway, I ramble.

Long story short – we had to take an expensive taxi from the ferry terminal to town (I didn’t even get to rant about how the taxis refuse to use meters and you have to just negotiate ahead of time, though they often refuse to as everything is “fixed price” or so they say). We split it with an Australian woman though from our boat, who was just as outraged at the system.

Kuching is in Sarawak, which belonged to the Sultan of Brunei 200 years ago. It was then ceded to a British explorer whose family ruled until the Japanese took over in 1941. It was part of the Japanese empire for a little over 3 years before being returned to the British and then ultimately becoming independent as part of Malaysia in 1963. Kuching is one of the most multi-racial places in Malaysia – with many Chinese descendants, as well as Indian and native Malays. The signs are in many languages, usually Mandarin (but also other Chinese dialects), Malay and English, but also some Arabic, as Islam is the primary religion here.

That first evening, we walked to the waterfront in search of food. This being Friday, we expected people out and shops open. Well, that was not the case. Saturday evening proved to be more lively, but everything on Friday was pretty much closed by the time we got there (8 pm). Saturday we walked to the Sarawak Museum, where they have amusing taxidermied animals, as well as good displays of local architecture and cultural exhibits. There’s a giant hairball (basketball size) that came out of the stomach of a crocodile, as well as a watch. (Sorry – no pictures allowed) The animals on Borneo are biologically diverse as it’s an island with a variety of isolated habitats where evolution took a different course, if you believe in that. Kuching is the gateway to some good national parks we intended to check out.

Saturday afternoon we boarded a bus for the weekend market, which we had heard was huge and a cheaper place to buy souvenirs and food. It was pretty big, but compared to Bangkok’s, it was tiny. We walked around for less than half an hour before settling in the market’s food court to eat and watch a band play some country songs we recognized (see Instagram video).

That evening we went to the waterfront to watch a street performer’s competition we had seen signs for. We sat down at 7:15 for the 7:30 show, next to one of the performers. He chatted us up and explained the selection process and what it was like to perform around town. There are not a lot of bars and the restaurants are not really set up for music, so gigs tend to be few and far between, or only for established bands. They went first (though not for another hour, as there appeared to be something wrong with the sound system), were very good and we stayed for a few more acts, including a very talented kid who had dance moves like I’ve never seen before (another Instagram video). 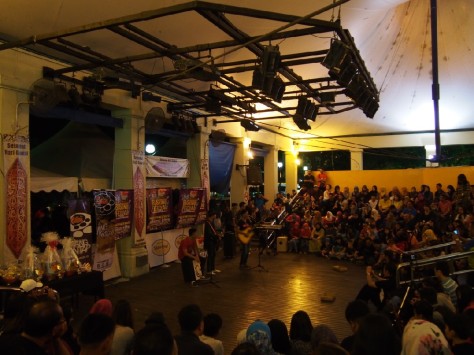 Sunday we went to a megamall, to see Pitch Perfect 2. We laughed at completely different times than the rest of the audience, but oddly, it made us a bit nostalgic for America. The mall was more crowded than the streets downtown, as there was a rattanball tournament and a car show going on that day.

You can’t go more than a few minutes without seeing a mall in all the major cities we’ve been to in Malaysia. And yet, we can’t seem to find many decently fitting clothes – our body types and styles are not exactly their target audience (head scarves and short sleeved button downs not exactly being our thing). The malls are air conditioned and packed with every amenity you could need, which I suppose is because it’s really hot and rains so much. We don’t mind though, as all our rain gear is finally getting used.

Probably the most popular place to visit near Kuching is Bako National Park. It is a 40 minute bus trip to the coast, where you check in and buy a boat ticket for the 15 minute journey to the park’s headquarters. We opted to stay overnight as we heard the evening is the best time to see animals, and the night walk is good. There are many trails you can do, but half the park is currently closed, so we were limited to just the short ones. We first went to one of the beaches, where we walked up through rainforest to a flat rock, grassy topography like I’ve never seen before and then to a cliff overlooking the beach, where we met three German girls we had seen at the street performer’s competition. They were delighted that we were Americans as they had not brought enough money for the trip and only had US dollars on them. Though we don’t have much use for dollars either, we had plenty of ringgit with us. We saw three kinds of monkeys that afternoon – the mischievous long-tailed macaques, who hang around the headquarters to steal food from tourists, the silvered langurs, who tried to pee on us, and three groups of Proboscis monkeys. 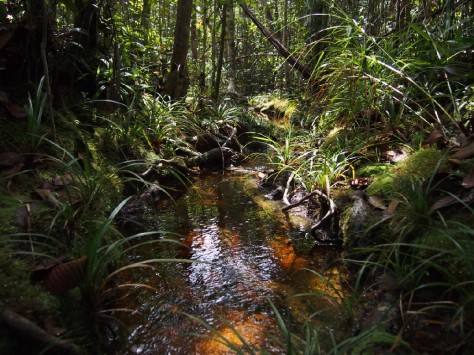 We signed up for the night trek that evening, silently hoping we would spot some rare mammals, like the flying lemurs. No such luck, but we saw tons of insects and a few birds.

The next day, we woke early and did a 3.5 hour loop trail that went by mangroves, up a steep climb in the rainforest, to another grassy zone. There are 7 separate ecosystems here and its tough to distinguish between them, but the contrast between rainforest and the highest ecosystem is very discernible. We saw few animals and were incredibly hot and tired by the time we returned to headquarters for our boat back.

The rest of the day we spent relaxing at our hostel, enjoying the hot shower and air conditioning after two days of being drenched in sweat. I felt sorry for the other people on the bus, as we were quite fragrant.