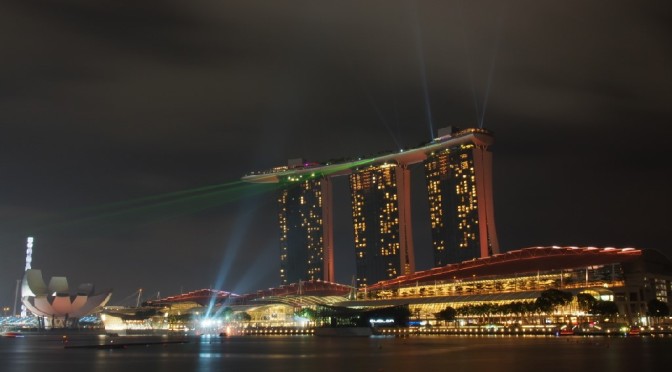 Crossing into Singapore from Malaysia was as organized as you might imagine for such a strict country. Everything was very well labeled with signs in English and 2-3 other languages. We took a public bus across the border, for a mere 70 cents and ended up being dropped off 2 blocks from our hostel in Little India (after about an hour). None of this we knew when we boarded the first bus. We were just hoping to get into the country without hauling our bags too far. While they did detain the tourists in front of me for a “routine check” and then took my index finger prints, it didn’t involve any scams as far as we could tell. A far cry from some of our other border crossings. And cheap!

We had a full day and a half before meeting back up with our New Orleans friends. We took full advantage of our 3 days in Singapore and quickly mastered the public transit system (though it was easy as everything is clearly marked). Our first stop was to Mustafa Center, a giant store that is open 24 hours and sells just about everything (except Goldfish – the crackers – they might have real ones, we didn’t get to every section). Little India, where we stayed, is amazing. The buildings are low and the flurry of activity is fun to watch. Not to mention the food!

Then we headed over to Arab St, another smaller district, with loads of character and people. These little pockets of Singapore were our favorite part. While the skyscrapers may be impressive with good views, they lack the culture and bustle of the older neighborhoods. 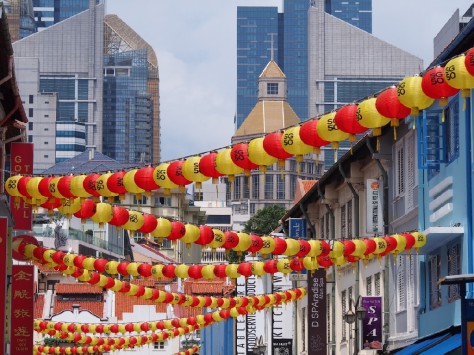 We then got caught in the rain near Raffles Plaza, and took refuge in a mall before venturing back underground and through a maze of tunnels towards Chinatown. Chinatown is a bit more touristy than Little India or Arab St. There is a huge Buddhist temple holding a Buddha tooth relic, where I donned a sarong and we spent most of an hour exploring the museum, relics and wax figurines.

An old friend of Riki’s lives in Singapore and we arranged to meet her that evening. First, we headed to the Ion Sky and had a free view from the 56th floor. Despite the lingering clouds, we had an amazing 360 degree view of Singapore, complete with labeled windows, of course.

From there we were able to walk to Riki’s friend’s place, where we met her new baby and husband while catching up and learning about the ex-pat life in Singapore. A great intro to the giant city.

Day 2 began slowly, as our bunk mates had kept us awake with their snoring. Usually, its cheaper for us to have a double room, but accommodation in Singapore is more expensive than everywhere else we’ve been, so dorms it was. The place was nice, but a bit strange, as many of the other guests were staying for very long periods – up to 4 months for an Indian doctor doing some research. Another guy was almost twice our age – a business man from Pakistan who was staying for a month. Thought the two were friends, until the Indian guy found out he was Pakistani. Not exactly who we’re used to meeting in dorms. We booked our next adventure (or thought we did) and then exchanged some Thai Baht and Indonesian rupiah into Singapore dollars. We still have some Laos Kip and Nepalese rupees, but nobody would exchange them.

That afternoon, we met up with our friends and walked back to the Arab St area and then to the riverfront. We saw the famous Merlion (get it?), Durian inspired buildings and the giant Sands building – with its boat top over three skyscrapers. 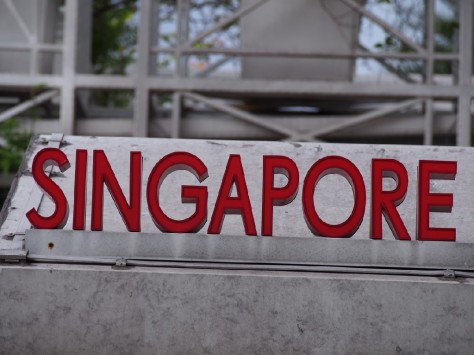 Then we walked to the Gardens by the Bay, where they have huge greenhouses and giant metal lit up trees. The greenhouses cost over $20 to go in, so we opted just to wander the outdoor free gardens, which were themed and then ate at a hawker center along the water. 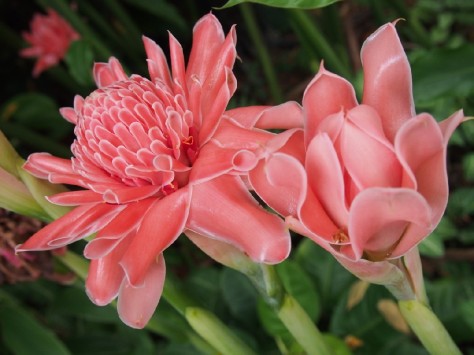 The culmination of the evening was a spectacular (and free) light show over the water. It was so good in fact, that we watched it from the other side the following evening. Basically, they spray water to form giant fans and then project lasers, images and movies across them. But that’s not all. They also play music, blow bubbles, and shoot huge flames of fire up over the water. I could have done without the fire – it was hot on our faces and all I could think of was the fuel leaking into the water. The rest however, was mesmerizing.  Click below to see a video (not mine).

Our final day, we joined back up with our friends at the botanical gardens and spent two hours exploring the various habitats. We discovered that Frangipani is a type of plumeria, which makes a lot of sense, but never occurred to us having seen it everywhere.
We then had lunch in Holland Village, which is packed with restaurants and bars and probably a popular place at night. We ordered a tower of beer for the 7 of us before heading back to their hotel for a break by the pool. 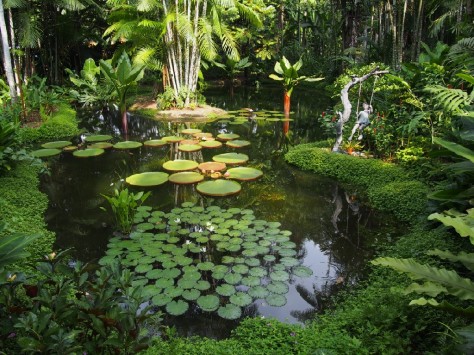 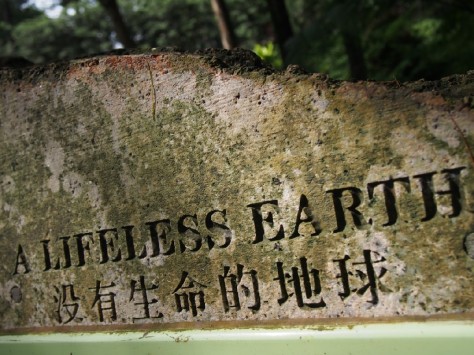 When the heat dissipated a bit, we took the public transit back to Chinatown and the Buddha Tooth Relic Temple. It is a fascinating place, even if I don’t believe the tiny blue beads on display are actually bits of Buddha’s brain.

Sadly, we said goodbye to our friends, as they had a 2 am flight back to the States. It was so great to be with people who already know you and don’t ask the standard backpacker questions – How long are you traveling for? Where have you been? When do you go home? Often times, not even getting to names until the end. It was a great change of pace.

We had a flight the following evening, but had heard great things about the Singapore airport and all the things to do there. We arrived 4 hours early, dropped our bags off and went exploring. We were not disappointed. We found a sunflower garden, gaming center and movie theater – all free. There’s even a pool and spa – not free. My parents even received an e-postcard complete with goofy picture of us. The 4 hours flew by and then we were off to Kota Kinabalu in East Malaysia/North Borneo.